I have a positive Legionella count - What do i do?

The likelihood of Legionella bacteria being present within domestic or other water systems, typically comes as no surprise to all those who have an involvement with water safety. As we know, Legionella bacteria remain ubiquitous in the natural and constructed aquatic environments and it is also true that airborne dispersal of the bacteria may well occur when aerosols or droplet nuclei are created.

As such, the focus of Legionella risk management should certainly be on preventing this known and hazardous bacteria from multiplying in water systems rather than reacting to a problematic situation. The preventative measures would typically be documented within an organisation’s ‘Written Scheme’ or in a Healthcare environment, their ‘Water Safety Plan’.

However, the presence of a confirmed positive Legionella count [or counts] does strike fear into all the those who have an involvement with water safety. Whether the positive count is warranted or could have been avoided is a moot point, and action must then be taken to investigate and resolve the root cause in the immediate and longer terms.

Do I need to sample for Legionella?

The HSE’s HSG274 Part 2 states, “Legionella monitoring should be carried out where there is doubt about the efficacy of the control regime or it is known that recommended temperatures, disinfectant concentrations or other precautions are not being consistently achieved throughout the system”. As such sampling for Legionella should be part of a defined strategy and not a random ‘fishing’ exercise. The complexity of the system will need to be taken into account to when defining your Legionella sampling strategy.

Typically then, the circumstances when monitoring for Legionella would be appropriate include;

Sample results and what to do…

We can be sure in the knowledge that the more sampling we undertake, the increased likelihood there is of obtaining a positive result. In essence, we can predict potential positive results will occur!

Any positive Legionella sample results [either as a result of a defined sampling strategy or in response to a particular issue] the approach in dealing with the positive count should be defined clearly within the Written Scheme / Water Safety Plan i.e. an agreed protocol. This protocol will provide a prescriptive process, that is easily understood by those persons [Authorised Person, Competent Person, Infection Control] involved at operational level who are responsible for investigating and resolving the issue. Simply put, the response to a positive result should have been agreed and documented prior to any sampling programme – whether undertaken in-house or by contractors. ‘On the hoof’ actions to dealing with a positive count should be avoided as this compromises the integrity of the agreed protocol!

To establish a root cause of the positive count, the prescriptive process for the protocol must include a systematic elimination of potential issues, including the sampling process itself i.e. has the process been compromised causing the positive count, as such a competency review of those who’ve taken the sample, handling, transportation and accreditation of the lab. Then investigating further, the water system.

When receiving a positive Legionella sample result, the lab can issue an interim report and a final report. The culture method for water samples takes around 14 days, during which time the lab will be observing the samples and when growth is observed the lab can issue interim count reports up to the final day of analysis when a final report will be issued.

Receiving a positive count result [interim or final] appropriate measures must be undertaken to protect the occupants of the building where the samples were taken. These appropriate measures need to have been agreed by the Water Safety Group and feature as part of the agreed protocol.

Examples of measures to protect the occupants may include;

When starting to prepare the agreed protocol both the HSE’s HSG274 Part 2 and the Department of Health’s HTM04-01 Part B broadly follow the same criteria for action in the event of a positive result. 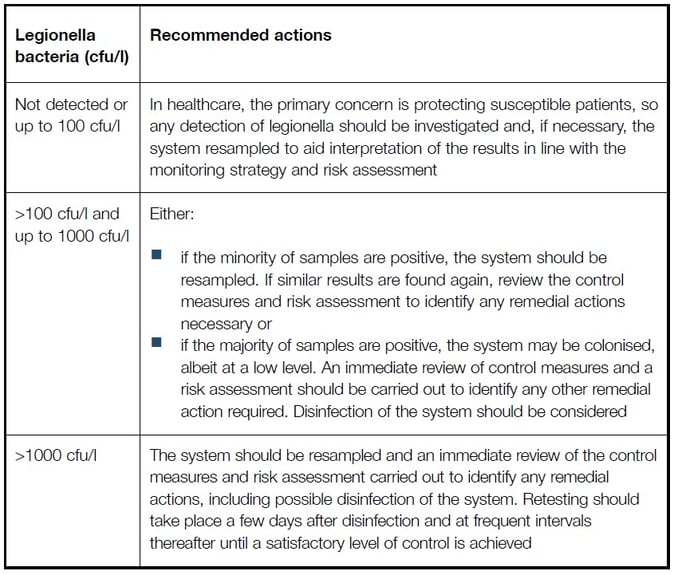 The action tables suggested by both the HSE and Department of Health can be taken by those who are defining the protocol and amended to be more detailed, and more appropriate to your organisation. It is vitally important any actions detailed in the agreed protocol do identify those individuals with defined duties / actions.

Timelines & deadlines of actions undertaken can also be a useful tool in ensuring problematic water systems are dealt with in an efficient and effective manner, these should be established, reviewed and monitored by the Water Safety Group.

It is true to say, positive Legionella counts are certainly a cause for concern, and the elimination of limited or extensive Legionella contamination is not likely to be easy, or by way of simple/individual measures such as chemical chlorination. That said, current guidance is straightforward and helpful and in addition to achievable action plans, a well thought through Written Scheme/Water Safety Plan and reliable advice from members of the Water Safety Group including Authorising Engineer [Water], the safe management [and elimination] of positive Legionella samples can be an achievable goal.

Editors Note: The information provided in this blog is correct at date of original publication - September 2018.

What will lockdown have ever done for us?

As life slowly moves back to normal, thoughts are now turning to how our working lives may be different post lockdown. This blog starts to think...
END_OF_DOCUMENT_TOKEN_TO_BE_REPLACED

What does BS8680 on Water Safety Plan - Code of Practice mean to me? During the day to day management of domestic water systems, whether large or small, there are occasions when a problem occurs...
END_OF_DOCUMENT_TOKEN_TO_BE_REPLACED