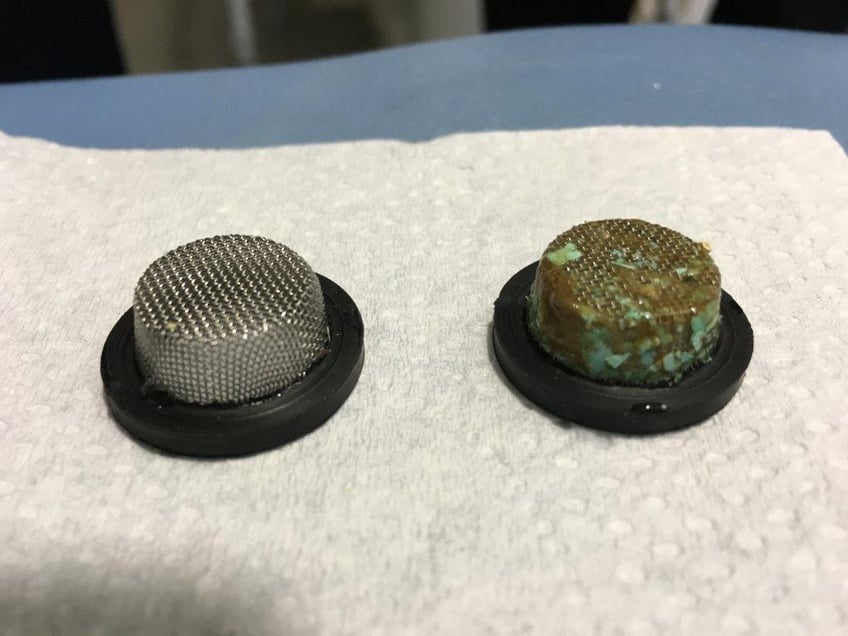 Biofilm is sometimes called the “City of Microbes”; which makes it all sound very mysterious. This week’s blog is part 1 of 2, where Water Hygiene Centre asks “What is a Biofilm?”

In all their various forms, biofilms exist on surfaces and comprise a community of micro-organisms attached to each other and surrounded by slime. This slime is known as EPS, short for extracellular polymeric substance. EPS is the key to the success of biofilms offering an adaptive and protective micro-environment.

Biofilms are ubiquitous in both natural and man-made environments. They are often found adhering to surfaces of one form or another, such as mudflats, teeth, sewerage treatment media and, as many Estates Managers know, the inside of water pipes and other components of our building water systems.

In natural environments biofilms are one of the first stages of the food chain, providing the food source for the smallest animals or by breaking down materials into basic nutrients which are then absorbed by plants through their roots.

Biofilms grow virtually anywhere from the deepest oceans to deserts and the Polar Regions.

Biofilms are also present on and inside the human body forming part of the normal flora and fauna of the skin and digestive tract. Sometimes the make-up of these biofilms can become unbalanced giving rise to health complaints or infections. Dental plaque is a form of biofilm that causes tooth decay and gum disease in most animals. Peptic ulcers and recurrent childhood earache have also been found to be caused by biofilms.

Biofilms are used to our great benefit in sewerage treatment process where micro-organisms are encouraged to form biofilms in bio-reactors, bio-rotating contactors (BRCs), trickle beds and other installations. The organisms in the biofilms break down organic matter reducing the biochemical oxygen demand of the effluent. The same principles may be applied to the pre-treatment of drinking water in which biologically active filters can be used to reduce the concentration of organic matter and in so doing reduce the amount of disinfectant required to prepare the water for distribution.

Biofilms have also been used effectively for the bio-remediation of contaminated land. The ability of some species of bacteria to metabolise contaminants such as oil and other petrochemical products into less harmful by-products is the key. Similarly, microbial leaching is the process of using biofilms to release metals from low-grade metal ores.

Biofilms in the Built Environment

Of course the biofilms of most interest to water hygiene professionals are those which form in building water systems. In poorly managed heating, cooling and domestic water systems, biofilms can contribute to operational inefficiencies including poor heat exchange and poor circulation and may also give rise to corrosion or the presence of pathogenic organisms.

As biofilms develop sections may break away seeding new parts of the system. This process, known as “Sloughing off” may occur when a biofilm is mature, following a physical disturbance or as a result of incomplete disinfection.

Biofilm formation is encouraged where water temperatures are warm, water movement is slow and where there are sufficient nutrients to establish the colony.

Despite best endeavours biofilm can and will form anywhere in a water system. At best formation will be patchy and limited. At its most severe biofilm can block the flow of water through pipes almost entirely or create a formidable soup of alien-like appearance in a water tank. More seriously, uncontrolled biofilm may result in human infections and even fatalities.

Part 2 will discuss how to tackle Biofilm including the benefits of living with it, and types of treatment and control methods.

Editors Note: The information provided in this blog is correct at date of original publication - November 2017.

The Water Hygiene Centre was established in 2009 to address the lack of independent water hygiene consultancy within the industry. From our humble beginnings, we have established ourselves as a market leader, helping clients identify and minimise the risk of waterborne contamination and disease, whilst improving compliance performance.

There are many reasons why a risk assessment project may stray off course or unveil nasty surprises. Here are a few problems that may arise during a project along with potential solutions:
END_OF_DOCUMENT_TOKEN_TO_BE_REPLACED

As we move into the festive season, we look at what effect this may have on the control of legionella in domestic water systems and the associated risks.
END_OF_DOCUMENT_TOKEN_TO_BE_REPLACED